I am writing this during one of the turgid international “breaks” that we have become accustomed to. England were outclassed in a friendly by Spain. No one was surprised. No one on the red side of Liverpool cared.


Everyone is eagerly awaiting the return to Premier League football. None more so than Liverpool fans. We entered the break off the back of a disappointing 2-1 defeat at Anfield against our new-found “bogey team” Crystal Palace. Klopp spoke out, sadden by the sight of thousands of supposedly Liverpool fans streaming for the exit as Palace scored. With a good 10 minutes to go. The usual debate about our support, or lack of it, ensued on social media and no doubt in many a boozer. 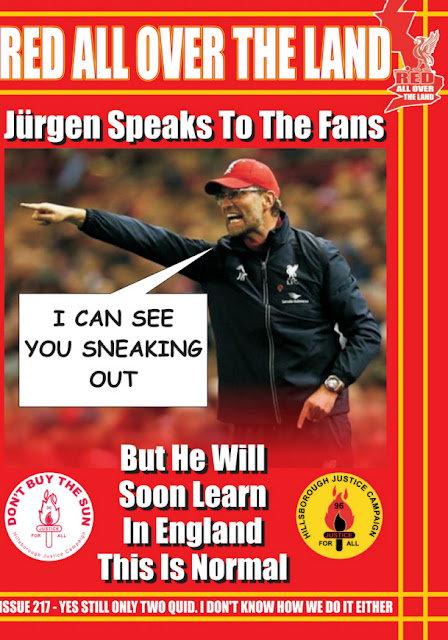 Even before that mass exodus, dedicated supporters group Spion Kop 1906, who are responsible for the majority of flags and banners on the kop, declared that the Kop would be free from their flags for the Palace game, posting the following statement:

“Following our earlier message that there would be no flags on display on The Kop, there has been speculation about why this decision was made. We felt it was a necessary step to take in response to a number of issues that have become apparent in recent months. We do the flags in our own time, at our own expense with the help of donations. This is not about any one individual, but those of us who collectively are responsible for many of the flags and banners, keeping alive one of the last few traditions in The Kop. We will be speaking to supporters about these issues.”

It was a sad statement with a real air of “why do we bother” about it. It is a feeling that I have found sweeping over me of late. After the initial optimism and excitement that swept in with the arrival of Klopp, only a few games later we are seeing the personification of modern football with thousands leaving early if not in disgust at our first loss under the new boss, certainly apathy.

I honestly don’t know what everyone wants any more. It feels like people want to know, now, that we will definitely win the league otherwise they won’t bother. It feels like people expect us to win every game. And not just that but win it 4-0. You can point the blame at what you like, the modernisation and capitalisation of football; Sky Sports and social media but ultimately the selfishness and need for instant gratification that permeates through society today has well and truly engulfed Anfield.

What we all suspected when Klopp first arrived is being born out, that our so called famous support just isn’t famous any more. It’s something Klopp is quickly becoming to realise and perhaps in the back of his head is pining for the yellow wall that loved him so. Of course Klopp is still riding a wave of support and no doubt if he begins to get us playing good football and winning games then a bit of bounce might yet return to Anfield - but I can’t help feeling that’s it’s all gone, perhaps forever. I’m starting to accept the inevitable. That the Premier League is no longer the purveyor of football as we know and love it. We’ve known for years that the stadiums of the biggest clubs in the world, especially in England are becoming filled with tourists and spectators rather than supporters. We’ve known for years that the game is being run as a business with little or no consideration of the real fans. But perhaps we have now reached a real tipping point from where this is no return. It’s no wonder that lots of dedicated true followers of football are getting their kicks elsewhere in the likes of FC United, Dulwich Hamlet and other non-league games or the foreign leagues and where we have become tourists ourselves at the likes of Dortmund, St. Pauli or Athletico.


I will still keep going of course; Anfield is a difficult drug to kick, even in it’s current heavily cut state but I now go expecting the staid run of the mill atmosphere that is the norm. I appreciate the negative tone of all this, the feeling of resignation and I hope I’m wrong. I hope there is a way back, but I’m afraid I just don’t see one at the moment.
Tweet @AnfieldShrine
Posted by The Anfield Shrine at 03:03:00