We deserved this. We all deserved this. Klopp asked for an atmosphere, he had delivered a rallying cry. We didn't deliver and in turn they didn't deliver. Early kick offs can be sluggish to get started at the best of times, but the Anfield crowd sat back from 12:30pm and expected to see us roll over bottom of the league Swansea. We should know by now that football doesn't work like that. The Liverpool players responded in kind, Lovren and Klavan exchanging about 7 passes in a row within the first 60 seconds. This was the sort of game (and Swansea the sort of side) crying out for a fast start, surprise them, get amongst them, worry them. Instead we sat back, knocked the ball about and probed gently. I’m all for patient build up but there was no cutting edge, no urgency, no surges, no changes of pace.

Even Klopp seemed content to let the half pass him by, sitting back slumped in his “bucket seat” and if I’m not mistaken not raising himself to offer instruction or cajole from the technical area once. With such slumber on the pitch and the bench, you could hardly expect there to be much noise from the stands.

Who am I to doubt Klopp? He knows more about football than I do about hangovers, but I couldn't help think he got it wrong with the line up. Against a team which we knew would sit back and without Mane we needed as much pace and attacking intent as we could get and for me playing Lallana in the front three and then Henderson, Can and Wijnaldum in midfield just seemed too defensive and a waste. Lallana is capable enough in the front three, but he has been a revelation in midfield and by putting another out and out forward up there in his place, like Sturridge, I think we'd have had more threat and more guile and therefore a better chance of unlocking the Swansea door. Henderson, Can and Wijnaldum seemed to just get in each other's way most of the time, perhaps there is a need for two out of the three, but surely not all three? With Swansea offering so little in attack, the centre backs dealt with long balls easily enough, would collect the ball, knock it 5 yards to Can, who would then mostly look up, knock it another 5 yards to Henderson who would spray it wide to Clyne or Milner. It seemed completely pointless. And the graphic from the BBC below showing average player position would seem to collaborate that, with Can, Henderson and Winjnaldum all overlapping. 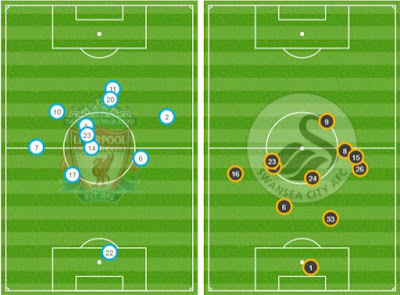 Our best chance of the half did indeed fall to Can, with Henderson swinging a beautiful ball in and Can arriving perfectly onto it only to head it wide. That was on ten minutes, and you hoped that it might spring us all into life, but we fell back into the pattern of patient probing and the half ended with only half chances to speak of. Swansea were well organised, as expected, but you hoped some words from Klopp at half time would energise us and surely this would be one of those games which would eventually end with us getting on top and netting one or two.

There were no changes at half time, which disappointed me a little, but I can understand when a manager wants to give the 11 he has sent out another ten minutes to carry out his half time instruction. However it wasn't any half time words from Klopp that woke us up but 5 minutes of madness which ended with Swansea 2 nil up. Their first goal was scrappy and the 2nd sloppy as Llorente rose well to head home, but you felt that he shouldn't have been allowed that opportunity.

Only then did it look like we gave a shit and on came Sturridge - finally. Although he had been getting readied by Klopp before the 2nd Swansea goal went in, now he was needed more than ever. It was in fact Firminho who got us back in it with two brilliant goals and then with 20 minutes to go you felt it was going to end one way. But we still struggled to break down the wall of white and lacked imagination. Sturridge gets some stick when he comes on for "not doing much" and not moving enough, but he makes decent enough runs and he always shows for the ball, but he just wasn't getting played any decent passes. This is another reason I'd have liked to have seen Lallana in midfield with Henderson, both of whom have the ability to unlock a defence with a clever ball. Our default move appeared to be the ball out wide and then put a cross in. It's a move that has it's place, but can be easy enough to defend against and we needed much more variation in our attacking play.

Then of course came the hammer blow, Tom Caroll simply ran and ran through midfield and at our defence and we couldn't seem to deal with it. Fraser for Bournemouth anyone? He beat Lovren easily before Klavan desperately stuck a foot in only for it to break to Sigurdsson who reacted first and slotted the ball home.

This was a disastrous result, there is no other way of describing it. After a relatively poor run since the turn of the year our title hopes were already fading and this could well be a nail in their coffin. I'm writing this having seen Arsenal win with a late late penalty against Burnley and Chelsea have just gone one nil up against Hull. Spurs and City sharing a point was the best we could hope for and now it looks like we face a fight to secure top 4. Yes we have to play Spurs, Arsenal and Chelsea all at Anfield and we still have City away as well, which could be seen as positive as there is a lot to play for still, but equally if we don't get good results in those big games, goodness knows where we might find ourselves.

But I am going to remain positive. We have Matip back to sure up our defence and Firminho will hopefully have found some form having scored that brace. We are still in both cup competitions and as I've just referenced at least a lot still lies in our own hands when it comes to the league. You cannot imagine that Klopp will let this result lie and I can see us reacting well, firstly against Southampton in the league cup semi final and then in the crucial game against Chelsea.

It might feel hugely disappointing to have virtually thrown away our title chances with such a poor display, but we should keep a sense of perspective. After the last few years of no silverware and disappointing league finishes, to be back in the top 4 and the Champion's League next season would be real progress.
Posted by The Anfield Shrine at 09:44:00 No comments: