If there was ever a game that epitomised the cliché "play badly and win" it was this one. Winning ugly.... grinding out results... the sign of a good team. The clichés just keep coming after this result. But win ugly we did and a good side we are.

Perhaps ugly is perhaps a little harsh. Functional would be more accurate. You have to feel sorry for Swansea, they were much the better side in the first half and Mignolet had to make a couple of decent saves. But on the other hand, in a way that it becoming increasingly heartening, we still looked relatively comfortable in defence. You could look at the first half an hour as a decent side simply handling a good spell from a good side, at home. We improved markedly in the 2nd half and Swansea began to wane. Worrying we still didn't create a great deal and it was a huge amount of fortune that brought about our goal. But here come the clichés again.... you make your own luck. Or perhaps more accurately, Brendan Rodgers makes our own luck. It was a shrewd tactical move from him to bring Gerrard on and lie him deep where he could both shield the back four, pull the strings and allow Henderson and Allen to push a bit further forward. Had that happened, it's not as likely that Henderson would have made the run that he did for the goal.

You also have to feel that had we not got that luck we would have created something to get the goal before the end. Sterling and Sturridge improved as every minute of the 2nd half passed. It was a shame that Sturridge's clever little effort at the end bounced back off the post.

I'm not going to go through and rate each player individually. On the whole I think everyone ranged from a 4 to a 7... maybe a 7.5 with mentions in dispatches for Mignolet, Skrtel, Sakho and Allen at the top end of that scale. Lallana and Can very much at the other end.

Gerrard's contribution is worthy of mention - you'd expect nothing less from a player of his experience and quality.

It sets up this Sunday's game with Utd perfectly. There is no doubt that it is a behemoth of a game... but strangely enough a point probably wouldn't be a bad result. Utd have an incredibly hard run in compared to us.

But we can't go into it looking for anything other than a convincing win and I'd like to think everyone has been saving their 8s and 9s for this one...

Tweet @AnfieldShrine
Posted by The Anfield Shrine at 01:50:00 No comments:

After crashing out of the Europa League in midweek.... or indeed late midweek (if that is a thing) a lot of pre-match talk was around the idiocy of having to kick off against City at noon on Sunday. Now no longer living in Liverpool, it also meant a 5am alarm clock for me in order to ensure we made kick off comfortably.

Arriving in a windy but beautifully sunny Liverpool I was struck by just how much I miss the place. Putting that slight melancholy aside it was up to the ground and into Home Baked Anfield for what is becoming an obligatory pre match coffee. I can't enthuse enough about Home Baked Anfield, it represents everything I love about Liverpool... an industrious and creative social enterprise doing genuinely brilliant work for the community without any insincere, patronising millionaires talking about a "big society" in sight. I also took the opportunity to buy copies of We Are Liverpool and RAOTL fanzines which are stocked in there. As you will have probably seen from previous posts, independent print fanzines are struggling to survive in the environment of modern football and they too should be supported. I wouldn't be surprised if the number of 'fans' sporting a half 'n' half scarf outnumbered those buying a fanzine and that is a truly depressing thought.

The malaise of modern football is a topic that troubles me constantly, and one that seemingly does so for a lot of other football fans. Short of turning our backs on going to the match completely, I don't know what the answer is and it is a complex debate. I'll be penning some thoughts on modern football exclusively in issue 212 of RAOTL which is out some time late March... so pick up a copy, but for now I put those frustrations behind me and looked to enjoy the game. 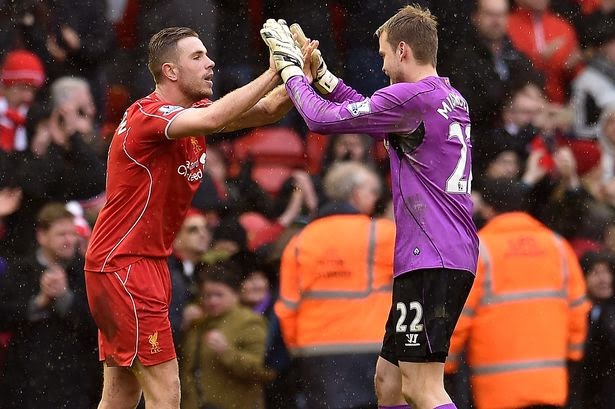 Usually in the kop, me and my old man were position in the slightly unorthodox spec of block 128 of the Anny Road (which is in fact on the Centenary Stand side). It's not a horrific spec in itself, but it is virtually impossible to see the corner under the scoreboard. Anyway... by all accounts lots of fans had 'lost their shit' as the kids say about Rodgers team selection and a lack of a "recognised" striker in the starting 11. I admit I was surprised not to see Sturridge starting, but are we all not agreed that Sterling has now become a striker...if not a recognised one? Confusing. Anyway, Rodgers must feel that Sturridge is still finding his feet after the lengthy lay off. Whatever the reason, no one was thinking about it 10 minutes in when Henderson produced an absolute cracking strike to put us 1 up. The opening sparring had been pretty even and both sides looked like they would threaten, but the fact that we have players starting to produce goals like that for us is extremely encouraging. The loss of Gerrard at the end of the season is starting to look a little less concerning as Henderson seems to grow into his leadership role with every game.

Although I felt Liverpool were well worthy of our lead it wasn't a huge surprise to see City equalise just before the half an hour mark. Just like the same game last season, we were going to do very well to get away with City not scoring as despite what anyone says about them they are a very, very good side. The goal was a good move and completely opened up our otherwise pretty solid defence and so it looked as if we were heading for a really tight 50 - 60 minutes.

I had said before the game that I would happily have taken a point out of this game, and this thought crossed my mind again after they equalised. I don't think it was an overly negative thought, considering how poor we were before Christmas in our push for 4th spot I really felt like a point today might prove pretty good value.

Clearly Liverpool had different ideas to me, and am I glad about that. In the second half despite City having plenty of intent, we actually defended pretty resolutely and limited them to just one short on target. On 75 minutes the "little magician" that is Coutinho produced his 2nd "worldie" in as many weeks. We all knew he needed to add goals to his game, and in truly Brazilian fashion, he's decided to add not just goals, but incredible goals. It wasn't just his strike that was so pleasing though, his all round game today was an absolute pleasure to watch, We are blessed to have him at the club... and let's just hope like so many of our youngsters, the rest of the football fraternity and the Spanish giants in particular continue to "underrate" him completely.

It was always going to be a nervy and tense last ten minutes but these days I am a lot more confident about our ability to hold on to leads. A couple of substitutions and stoppages took the sting out of the game and it's something which I think we are becoming increasingly good at... what the modern day football people would call "game management." Or I suppose more traditionally what we would call "seeing a game out." So saw the game out we did and on reflection as we darted down the Walton Breck Road it was 3 points that, on balance, I think we very much deserved.

The blueshite failed to us any sort us favour in the immediate aftermath... but no change there then. We're not a side to rely on others though and on we march after our blip in Europe. Brendan Rodgers' Liverpool... are we on our way to glory?
Posted by The Anfield Shrine at 12:47:00 No comments: