Hours before Liverpool crashed out of the Europa League in Turkey, I had written a guest blog for Liverpool menswear institution Giancarlo Ricci discussing the rest of the season and how much glory we might have in store. I also pondered the question of what would qualify as a successful season.

Well  on Thursday evening one scenario was answered and we now know that there will be no European glory and one of our routes into the Champion's League next season has now been closed off.

Due to the 6pm kick off I missed the first half on TV and was reduced to following the game on my commute home via the Sky Sports app, and by the sounds of it I missed by far the best of the game from Liverpool's point of view. In the 2nd half we retreated further and further into our own half, looking to see out a nil nil draw and what could have been lauded as a 'typical' and brilliant European away defensive performance if things had turned out differently. Playing a back 5 for most of the 2nd half as opposed to a back 3, despite being camped in our own half, defensively we looked relatively comfortable. We reduced Besiktas to pot shots from range. However, the more and more pot shots a team has, the greater the risk that one will go in.

The bigger problem for us seemed to be the fact we were becoming increasingly overrun in midfield and seemed incapable of putting together any sort of threatening attack on the break. You can be as good defensively as you like... but eventually that sort of pressure and scenario will end badly. And so it did.

Considering our recent turnaround in form, it is hard to criticise Rodgers too heavily for his tactics, but in Europe he does seem to struggle more than domestically, it is almost the reverse of Benitez. It seemed glaringly obvious to everyone that a change needed to be made to get a better control of midfield and bringing Manquillo on for Ibe wasn't very effective. I should imagine that he felt that we needed a better defensive player for the remainder of the game on the right side than Ibe, but Ibe has done his defensive work very well recently. I would argue that when you are under the cosh like we were to have the attacking threat of Ibe was a greater defensive asset than Manquillo himself who hasn't had minutes on the pitch for some time.

Anyway... their goal came and then we saw the game out clearly hoping we'd win the penalty shoot out. The rest we know, and I'm not going to dwell on Lovren's miss. Everyone knows I have been a big critic of his, but he obvious had the balls to put his hand up for a pen and he can't be blamed for us losing a game in what we all know is a lottery when really we should have done a much better job of seeing the tie off in 90 minutes. 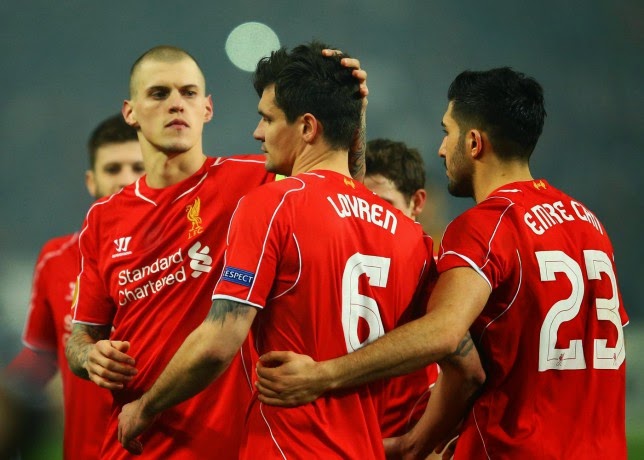 What I really want to comment on is the reaction of some Liverpool fans to our exit. The usual idiocy around Lovren's miss aside, there was a lot of talk from generally sensible headed Liverpool fans about the fact that going out was a "blessing in disguise" and that the Europa League is shit anyway. Granted it's not the European Competition that we all really want to be in, but this sort of attitude and reaction disappointed me.

I was even amazed to hear one of the Anfield Wrap lads, who are usually a bastion of sense, indicate that when Ba hit the bar he had almost wished it had gone in so we could have just got off and got home. I completely understand the worry around playing 120 minutes, in Turkey, when we have Man City at noon on Sunday, but I just simply cannot bring myself to 'not be arsed' when Liverpool go out of a competition in Europe. Especially when we are not that far off the final and by winning it we could qualify for the Champion's League. Liverpool FC are about winning games and winning trophies.

Would we all have been happy enough if Houllier and the lads had sacked of the UEFA Cup and League Cup in 2001 just to ensure we finished 4th? How much momentum did that treble winning season have because of the fact we kept on winning silverware.

To me it strikes me as a bit of the malaise of modern football that has crept in where it's not just about the game in front of you any more but it's about squads, stats, rotation, qualifying money, kick off times and whether one trophy is better than the other.

Whatever happened to wanting to win?

Will Mario ever be super at Liverpool?

It's been a little while since I penned anything and funnily enough me not rambling on about stuff on The Anfield Shrine or in Red All Over The Land has coincided with a sustained resurgence in Liverpool's form. There is a lot I could write about how our season has turned around... how praise should be plentiful for all concerned; specifically Rodgers and some of our younger stars, like Emre Can. Instead I thought I'd focus on someone who we all know gets too much attention as it is... Mario Balotelli. I will confess that I was one of those fans who was extremely excited about Balotelli arriving at Anfield. I am one of those people who loves a maverick, loves someone who dares to be a bit different, loves what is commonly termed in football these days 'a character.' It wasn't just that Balotelli was entertaining because of the various on and off field antics that we had heard about over the years but that I genuinely considered him to be a fascinating person as much as a footballer. There is clearly a lot going on behind those intense, almost mournful eyes of his. He has suffered a troublesome up bringing, faced horrific racist abuse, rejection and seems to be someone who is just not that at ease with the world or himself and I don't think there is anything wrong with that.

I was really hoping that in Liverpool, Mario might finally find his home. So what now? After the initial burst of hysteria around his arrival it became quickly apparent that it wasn't going to be easy for him to make his mark at the club. There is no escaping the fact that from a purely footballing point of view, he hasn't been good enough. But why are any of us that surprised? Firstly, to be fair to him, we do not naturally play a game or system that suits his style of play. Secondly he could not have been more different to the sort of footballer that Rodgers likes... humble, hard working, and willing to press high up the pitch. Balotelli is an enigma, capable of brilliance but someone who is caught up in his own head, not purely out of arrogance, just simply confusion and insecurity - that's how I see it anyway.

Off the pitch, as it happens, things have been very quiet. This is something about the whole affair so far that I see some real encouragement in. Everyone (including myself) was hoping for a bit of pantomime off the pitch, Mario turning up at the Liverpool Student's Union and inviting the fittest girls back for a house party, or driving down Queen's Drive in some super car lashing cash out of the window. But unfortunately for the tabloid hacks and Twitterati he has actually been pretty hardworking by all accounts and kept his head down, genuinely looking to do well. He seems pretty well liked by his team mates and that is something that has been said of him before. He's a kind hearted soul and a good laugh from what you can gather.

So this is all very nice... but what does the future hold for him at Liverpool? There is talk of a corner being turned after he popped up with the winner (and his first league goal) against Spurs, followed by an encouraging display in the cup against Palace. There is no doubt he looks more comfortable around a player like Sturridge and despite what some people say he is putting a shift in at times. I do believe has something to offer, Rodgers spoke after the Palace game about his undoubted quality but as always it is simply his mindset that is the barrier to succeeding. But that quality (which you outweighs the likeable and hardworking Lambert's considerably) counts for something and with Sturridge around he might just yet play a part in our season.

However, despite desperately wanting to believe that this isn't the case... long term I just can't see it working. I'm not sure that long term it can work anywhere for Balotelli - he seems a troubled and lost soul who will struggle to ever find contentment in the world of modern football.

Having said that, if there was ever a place for a maverick or weirdo to find their home, it's Liverpool FC. We are a club like no other and a city that knows a thing or two about being maligned and neglected. I'd love nothing more than for Mario to become the Super Mario at Liverpool that he has the potential to be - but the truth is, no one knows what will happen next when it comes to Mario Balotelli and that, in a nutshell, is the fascination.