Last week I penned a few reflections on the 5-1 drubbing of Arsenal at Anfield so I thought I’d put down a few Arsenal reflections take two: of the FA Cup clash at The Emirates yesterday. 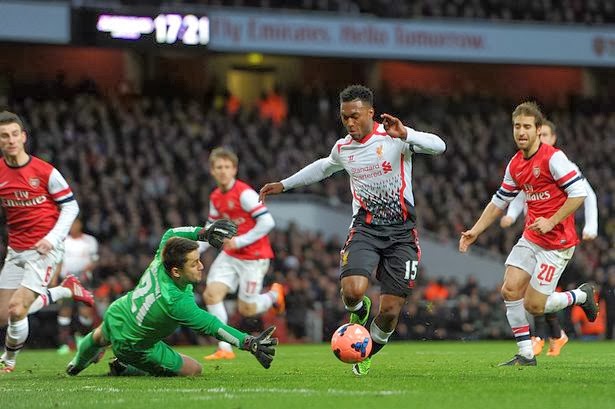 I have to admit to not being able to follow the first half as closely as I’d have liked, firstly not being at the game itself and then secondly being on the road back from a family Christening. So Sturridge’s early chances and Arsenal’s subsequent first half goal were received through a pretty poor 5Live signal. However I think the first thing to note, is that anyone who thought this game was going to be anything like Anfield a week ago, is an idiot.

Arsenal were never going to be as poor as they were at Anfield, and having got a pretty miraculous three points at a sodden Craven Cottage in midweek, I couldn’t help feeling that perhaps today wouldn’t be our day. Football seems to move in those sorts of ways. And so it proved to be. Sturridge wasted the opportunity, or opportunities to give us another blistering start and I think that pretty much set the tone.
I can’t say that I’m all that disappointed, and I won’t be too hard on Sturridge. He has been immense this season and you can forgive him some slight fatigue.

I was able to follow the 2nd half properly in front of the TV and after going 2 nil down, we certainly rallied. We threatened more than Arsenal, and Fabianski was immense in keeping us out. The penalty was deserved and Gerrard dispatched it in the manner that we’ve come to expect. I have to praise Rodgers for a very positive substitution in bringing on Hendo for Cissokho, which very nearly had the impact intended. Although Joe Allen performed admirably and he clearly needs a bit more match time, I think it was pretty clear that we missed Henderson’s drive and work rate; which just underlines how far he has come and what a player he now is. I like Allen as a player and he seems like a good guy, but I wonder if he has the quality or presence to survive Rodger’s revolution in the long run.

Sturridge missed another great chance, which again compounded the fact it wasn’t going to be our day. There is no doubt that we should have had a 2nd penalty, and I’ve yet to mention our good old friend Mr Webb… who had a completely shocker from a Liverpool point of view. It’s what we’ve come to expect.
We can certainly feel aggrieved, if not downright unlucky to not have progressed to the quarter finals, but all in all I don’t feel overly distraught. We are having an incredible season and we will have the odd off day and disappointing result. The FA Cup was a fantastic opportunity to bag some silverware this season, but now we have the chance to focus solely on the league; which is a luxury that most of the sides in the top 6 or 7 don’t have.

It’s Swansea next up at Anfield, and just like every game between now and the end of the season, it’s a massive one. We need to bounce back and ensure we pull further away in fourth. Isn’t it nice to be enjoying a season where at this stage of proceedings, a home game against Swansea has so much riding on it? Viva Rodgers, Viva la Revolution.

Tweet @AnfieldShrine
Posted by The Anfield Shrine at 04:26:00 No comments:

There has been plenty of jubilation, reflection and comment in the wake of what can only be described as our dreamlike result and performance yesterday against Arsenal, but I wanted to pen a few thoughts and reflections myself. 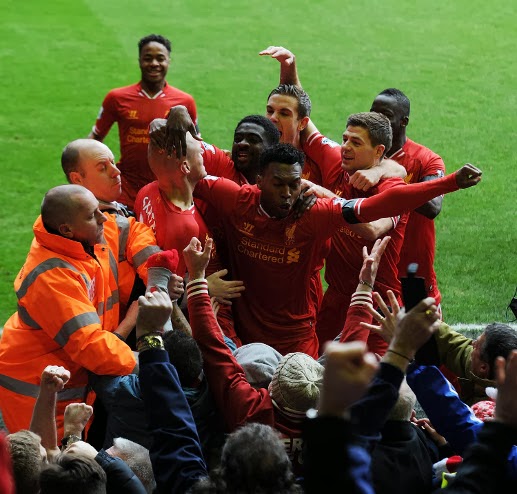 Having been a Liverpool fan for more or less 20 years I can't help but lean towards the pessimistic end of the spectrum most of the time. Don't get me wrong, I've been lucky enough to see more success and trophies than most supporters of clubs get to see in a lifetime, including a European Cup and not to mention a treble!

But equally, by Liverpool Football Club standards, the last 20 years will not be remembered as a glorious period, not when you compare them to the 20 years that went before. I've had to endure Man Utd dominance for just about my entire tenure as a red. So with that in mind, just when I dare to dream and see small green shoots of something special building at the club... I can't help but assume that it will all come crashing down at any moment.

Pre-Derby at Anfield 2014 I wasn't confident at all. Everton were looking the strongest they have for years, Martinez has them playing some great football and we had an injury list longer than a Leonard Cohen song (credit to The Thick of It for that joke). But I was proven wrong... in spectacular style.

At West Brom we dropped 2 points, no doubt about that... but strangely I was surprisingly sanguine. When you think about it, dropping points off the back of a terrible individual mistake, is actually easier to take than dropping points from a terrible performance. Individual errors will happen, we are all human and therefore in many ways you have to simply accept that occasionally luck will be against us and we may be punished by an individual error. It is actually harder to take that after all the preparation that Rodgers and his team put into setting the side up for a game, for the team to capitulate or simply not perform to the level we know they can. That hurts more.

So then it was Arsenal arriving at Anfield. It hasn't felt like we've had a good record against Arsenal for some time, and if I was a stats person, which I'm not, I expect they'd back my assumption up. So again I arrived at Anfield on the morning of Saturday the 8th of February, extremely hungover and certainly a little bit apprehensive. My thinking generally is... things are going well, too well. We'll come crashing down to earth sooner or later.

20 minutes in and I thought I was dreaming. My hangover had certainly evaporated at a rate of knots. We were quite simply breathtaking. Every single player (yes even Ally C) had an absolute stormer. It was an utter joy to witness. Just before the Derby I'd chatted with my compatriot about Coutinho and how I felt he had gone off the boil slightly and was perhaps losing interested in Liverpool FC... well how wrong could I have been? He was breathtaking against Arsenal, as was Sterling... Flanno, Henderson... everyone.

One criticism that has been levelled at Rodgers' Liverpool if any, was that we hadn't managed to beat the big sides yet, well that changed didn't it?

My mild indifference to Rodgers are the beginning of his reign has been well documented, and I don't think I was alone. The sheer length of time it took the Kop to sing his name with any gusto is surely testament to that. But now I am happy to say I am an absolute Rodgers convert... I'm starting to love the man, and so too is the Kop. One of my favourite moments of the Arsenal game, and there were many, was a period before half time when we kept possession with ease and knocked it around the back. The Kop simply applauded, warmly for 30 or 40 seconds. It wasn't loud chanting or even the tribal, fast clapping we do... it was an ovation, a round of applause in absolute appreciation of what we were witnessing. What we were witnessing, we all hope, and something I have never witnessed, was the Liverpool of old.

Having said that... I expect we'll go and lose to Fulham in midweek now. This pessimistic streak is hard to shake off....