Why Liverpool fans must fight for justice for Orgreave

Liverpool fans know all about injustice. For years we have had to fight the smears, stereotypes and vicious lies around Hillsborough and the death of 96 fans. Listened to by very few, and completely ignored by the authorities and the establishment, it is only recently that finally the truth has been properly exposed.

Just this week those involved in another injustice and have had a blow dealt to their own quest for truth and one that is intrinsically linked to Hillsborough - Orgreave. For those who don't know "the battle of Orgreave" as it was known was when tensions reached their highest during the miners strike of the 1984. And Thatcher's methods of "dealing with" the campaigning miners reached its most brutal and underhand. Robert East, writing in the Journal of Law and Society in 1985, suggested that rather than maintaining order and upholding the law, "the police intended that Orgreave would be a 'battle' where, as a result of their preparation and organisation, they would 'defeat' the pickets."[16] Michael Mansfield QC said: "They wanted to teach the miners a lesson – a big lesson, such that they wouldn't come out in force again."

On the day Assistant Chief Constable Anthony Clement ordered a mounted charge against the picketing miners. It was seen as "a serious overreaction" and the miners responded by throwing stones and other missiles at the police lines.[6] Clement ordered 2 further mounted advances, and the third advance was supported by "short shield" snatch squads who followed the mounted police, "delivering baton beatings to the unarmed miners."[6][18]

There were no fatalities but the brutality and lack of restraint shown by the police that day is widely acknowledged. It would be wrong to compare Orgreave directly with the Hillsborough disaster and no campaigners on either side have ever tried to do so but what links them is that the police force responsible that day; South Yorkshire Police.  The force that 5 years later were responsible for the deaths of 96 Liverpool fans and that then went on the smear the 96 families and actively  cover up their inadequacies and incompetence.

The injustices of both Hillsborough and Orgreave also share the fact that they are underlined by an attack and disdain towards the working class by Thatcher's right wing government and the elite.
The miners and campaigners for Orgreave have always stood side by side with Liverpool fans and the Hillsborough families, especially when so few others would.

I know my own friend and United Union activist and campaigner for Orgreave marched with miners, Hillsborough families and fellow supporters in Liverpool as the campaign for justice reached it's height in 2015 and many others have done the same. 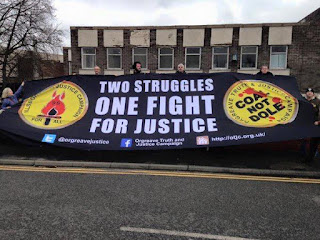 Yet this week the current Tory government has ruled that there will be no fresh enquiry into the actions of South Yorkshire Police that day. They have cited the reason that "it was too long ago for any lessons to be learned." Yet Lessons can be learnt from Hillsborough which occurred just 5 years later? It is an utter disgrace and a blatant shirking of the truth. I suspect that they know further enquiries into the motives and actions of that Thatcher government and the South Yorkshire police will be so unsavoury they can't possibly risk them being exposed.

Barnsley Central MP Dan Jarvis has said: "Given the substantial concerns that exist, it is astonishing that the Home Secretary will not commit to an inquiry or review." And the current South Yorkshire Police Crime Commissioner Dr Alan Billings said he was "shocked and dismayed" by the decision.

He added: "The government have marched the Campaign for Truth and Justice to the top of the hill only to march them down again.

"No one has ever suggested that the events of Orgreave were comparable in every respect to the disaster at Hillsborough. But the former miners and the former mining communities in South Yorkshire deserve an explanation as to what happened on that day and where Orgreave fits in the wider story of the miners' strike."

Considering the parallels of injustice and the level to which the same authorities and government were involved in both Hillsborough and Orgreave it is vital that Liverpool fans now show their solidarity and support for the Orgreave campaigners. They were there for us and we should be there for them. This is an issue with transcends football and regions and becomes an issue for those who believe in justice, equality and accountability.